If You're Alone, Always Take Condoms

Travelling alone is Scary. Especially for the first time. There’s the uncertainty of a foreign place and maybe a language barrier. There’s the uncertainty of whether people will talk to you, or if you’ll really be alone. For me, my first experience traveling alone also featured lost luggage and passport. Some things could only happen to me, but I’ll never forget my ebony and gold-coloured emergency passport. Oh, did I mention I also did it at Christmas? The first one out of my family home. Hey, moderation is for cowards.

When traveling alone, a meal out for someone who loves food presents the ultimate conundrum. You worry about eating alone, but you want to try exciting new places. So I found myself in Thailand, with tons of recommendations and all on my own after a stressful day. One name leaped off the page, and there was no way I was leaving without a visit.

If ever there was an unclear statement of intent, Cabbages & Condoms is it. A mission statement of things that usually aren’t seen together. It’s Thai food, but not as you know it. With the claim that “Our food is guaranteed not to cause pregnancy.” I mean, it’s difficult to imagine that it’s the food that has caused many unwanted pregnancies in Bangkok. 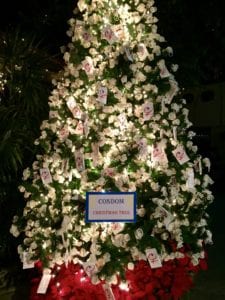 You see, the restaurant not only serves classic Thai food but it also acts to raise awareness of safe sex in Thailand. With a goal to promote understanding of family planning in the capital and donating some profits to local charities. It’s clear as you turn off the busy streets of Nana into Sukhumvit 12, that things are different here.

If there was ever a restaurant in which to fall in love or for a one night fling, this is it. Cabbages and Condoms is equal part quirky and French film romance. It’s a long kiss goodnight with a hand groping your bum. To fit the festive time of year, there is a large, decorated Christmas tree outside. Closer inspection shows there are no baubles, but instead, it’s adorned with 100’s of condoms. A picture that quickly entered my WhatsApp to send a Happy Christmas home. You walk through the wooden entrance to more shrines to genital protection and even a gift shop. We’ll get there; you always leave through the gift shop!

You could be forgiven, at this point, for think that so far this is all gimmick. That soon changes when walking into the main dining area. An open-air courtyard, dancing with more fairy lights than you can imagine and lanterns hanging amongst the greenery. You feel like you might just have walked in on an over elaborate proposal. A general buzz of chatter fills the air with busy tables. I’m eating alone, but I feel in love.

The menu is a mix of traditional Thai food and some options slightly more off the beaten path. My Chang beer cleansing my salivating mouth as I read through. All good one-night romance should start with alcohol. I’m convinced into starting with an ancient appetizer, Mieng Khum. Large beetle leaves containing a heady mix of shrimp, peanut, ginger, chili, coconut and a special sauce. They’re everything that makes Thai food great. Fresh yet sticky, with fiery chili and ginger and a satisfying crunch from the peanut and toasted coconut. There’s salt, sweet, sour, and spicy and I can’t stop. They’re meant to share, I finish them all. 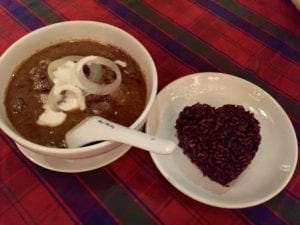 There are selections of curries, noodles, and meat & veg dishes on offer, making decisions impossible. The one draw back of lone dining is, there’s no one else’s to snaffle a fork full from. I momentarily rue my luck. That is until my Gang Mussamun Gae is placed in front of me. It’s a New Zealand lamb Massaman curry and it has the most luxurious and show-stopping curry sauce I’ve ever had. It’s thick with a subtle spice and hint of tamarind; sweet yet savory. It goes perfectly with the soft, tender lamb that gives with every bite. The room stops for a moment, maybe this is the closest a lone diner gets to getting lost in their lover’s eyes.

I sit and contemplate what’s just happened. I’ve dined alone but I’ve not for one moment felt lonely. I would settle for this over a 1000 Michelin-starred Parisian restaurant. The food is the best Thai I’ve eaten and the restaurant is by far the most beautiful. That’s before you consider the childish amusement of all the condoms. The bill may be slightly more expensive than the street style dining available locally. I may have had the most expensive main (470 baht/£10) but my bill with beer is still under 900 Baht. In fact, it’s under £20.

The bill is presented with a condom, without comment. It’s difficult to tell when eating alone, but I presume this is something offered to all. As I head back into the cauldron of Nana, newly in love, and confident that there’ll be no surprises in the morning.

Despite its tongue-in-cheek take on its serious message, underneath the Instagram shots is a fantastic restaurant. With fresh, vibrant and refined takes on Thai cuisine and its beautiful setting, Cabbages and Condoms gets way past Third Base. Put safety first and GO!