As with patience, punctuality is a virtue. So much so that legendary NFL coach Vince Lombardi once created Lombardi-time; The concept (and for his team, rule) that being ten minutes early to meetings is being on time. It’s not a bad way to try and live life. It alleviates the stress of time ebbing away as you rush door to door. It gives you time to compose yourself prior to your appointment. Ultimately it’s a tell of a well-organised individual.

But why has a review of a Sunday lunch resulted in discussion of promptness? Well you see, today’s locale, the Canton Arms, is both popular and reservation free. Every Sunday they just seat people as they arrive, and I’m reliably informed that they never have trouble filling those seats. So promptly we arrive, two friends actually sitting outside as they opened the doors. Like an expectant set of cats, pawing at the door, wanting to be fed and they’re not the only ones in the litter. But if good things come to those that wait, then surely we’re all in for a real treat.

The Canton Arms is what some would call a ‘real, old-school boozers’. Big wooden bar as a centrepiece? Check. Burgundy-painted walls? Check. Wood floors, proud bookcases and displayed jars of pickling and fermenting? Check, check and check. Yes, this is a pub that could only be described as cosy and a bit of a throwback. It might call itself a gastropub but it’s still got a British upper lip. 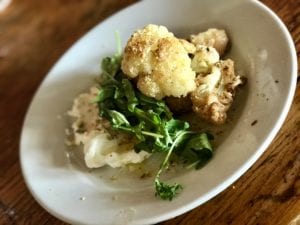 Middle Eastern in Stockwell – Roasted Cauliflower with Labneh and Dukkah

If the setting is very much a best-of-British pubs, then the menu gives a greater nod to the extense of modern gastropubs. There are some greatest hits, with roast beef and chicken and ham pie. But there’s also an expanse of further-afield offerings. A Sri Lankan pork cheek curry here, and mention of Labneh and Dukkah there. Like somewhat of a late-aged Brit, who’s taken a quick sabbatical from work to travel the world and wants to impart some cultural learnings.

The dukkah and labneh are a refreshing change of pace for Sunday lunch paired with tender roast cauliflower. A pretty plate with pistachio laden crumb of the dukkah like a gravel pathway across the thick, creamy labneh. Another plate has a large wheel of iron-rich, buttery foie gras and two wedges of golden brioche. It’s a generous portion befitting of its pricing at double the cost (£12) of the cauliflower (£7.40). The final starter is the most successful and also the most aesthetically appealing little plate. A smoked grey mullet with pickled onions and rye bread. A homage to Scandinavian, the mullet is flakey and moist with fresh, pickled red onion cutting through the oily fish.

We are, however, here to *ahem* compare meats. The usual team of unwavering beef enthusiasts order the triumphantly labelled ‘Rare’ roast beef (£17). It’s a declaration of intent and one that is well due. It’s blushing so hard I’m reminded of my face when my suit trousers ripped before a client meeting. Although too rare for one around the table, the meat itself is sublime. It’s the thin end of the beef spectrum with slender and tender strips leafed over each other. The almost melting fat has so much flavour to it that you can practically taste the field 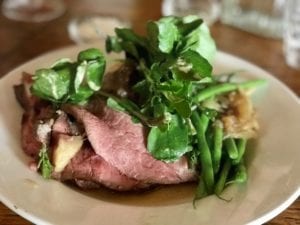 It’s accompaniment’s, on the other hand, are a mixed bag. Garlicky green beans are everything they portent to be, with love and attention paid to dredging them in a butter the French would be proud of. The roasties avoid the usual traps and are both crisp outside and fluffy inside with a rich gravy to paddle in. There is one cardinal sin, mind. There’s not a Yorkshire pudding in sight. Given recent exploits at The Florence and Franklins, this is a major disappointment. Our waiter notes that we’re not the first to have asked.

It should be mentioned that although it wasn’t pointed out to us, there are big sharer options too. A salt-marsh lamb shoulder for seven and a shin of beef for two that look good enough to quarrel over. Good news for our waiter that the beef and a very good bottle of Rioja proved more than a sufficient alternative.

It is obvious, come the end of the meal, why my friend was so keen to arrive early. The dining room is now heaving, with the informal seating style meaning tables of 6 are shared between two groups of three. Despite the refined cooking, it maintains an informal approach that’ll make you feel just a bit more Sunday.

The Canton Arms has fully earned its reputation and crowd. With interesting takes on pub classics and excellent roast dinners, this is a Sunday stop to be relished. Now if only they’d add a Yorkshire pudding….

Oh, and did I mention, I was fifteen minutes late?

The Canton Arms is possibly the most British of Sunday settings, your mum’s kitchen aside. With perfectly cooked roast beef and a range of starters and sides to suit all tastes, the only fault is the lack of Yorkshire puddings. That’s quite a Sunday treat. 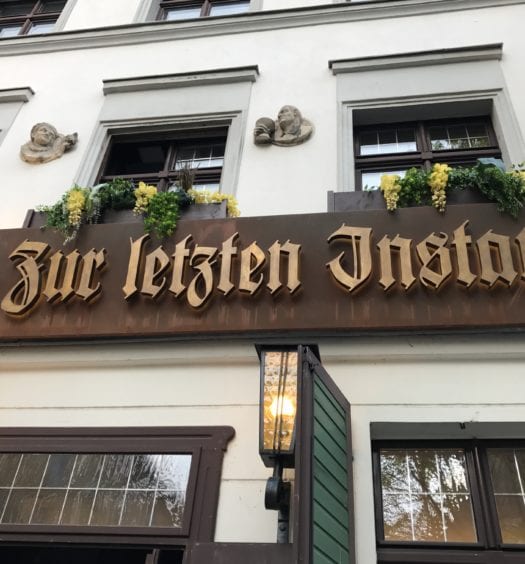 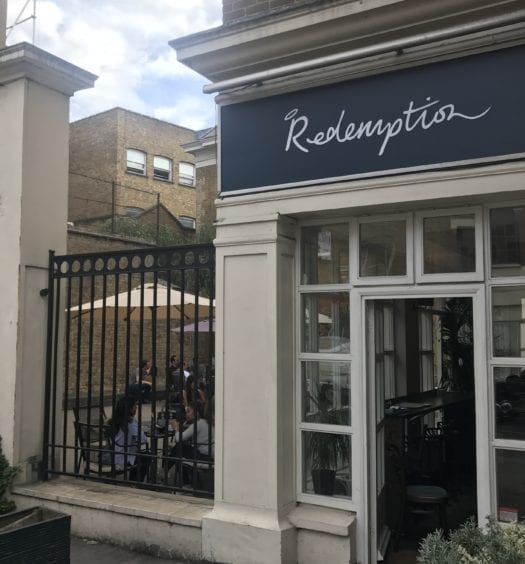