Size doesn’t matter, so the saying goes. No, let’s step back from the gutter. I’m not talking in a small versus large discussion but more in the transition from one to the other. Sometimes the reason something works and gains popularity is that it’s small, unique and perfectly formed. Or at least, that’s what I keep telling myself.

With restaurants, inevitably anytime notoriety is gained, the modern demand is to supersize it and glean more profit. Occasionally this works but often growing pains are discovered and it doesn’t hit the same heights. So it seems to go with a succession of popular residents at Pop Brixton. Kricket is the latest to rise to prominence from the South West London shipping containers. Originally seating just 20 people, there was a constant stream of Londoners every night. Their small, tapas-style sharing plates of creative Indian food were a big hit locally and it was only a matter of time.

In January 2017 they opened the Soho residence a stones throw from Picadilly Circus and I’ve been dying to visit ever since. Would their quick turnaround service work as well in a more central location? Pop Brixton, as well as a foodie hotspot, is also a great nightlife and drinking location. Did the concept work better as a hungry stop between craft beers or G&Ts?

The restaurant is one long open kitchen pass with bar stools surrounding the counter and a few diner-style tables. It’s all metal, wood and light bulbs; I guess you can take the restaurant out of Brixton. The view into the kitchen works fantastically well with this kind of food. Chefs twirling around, spinning out bread and skewering chicken. The smell of cumin and garlic filling your nostrils is transportative, leaving the chaos of Soho behind. 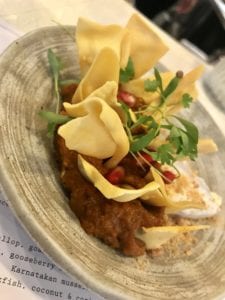 Ordering and service are ‘as it comes’, meaning that there’s the pleasing ability to ramp up and scale back in your excitement. We don’t, however, and dive into the menu. This is ably assisted by an enthusiastic and talkative server.

As always with cuisine that leans on spices, the vegetable options leap off the page. Of the 4 dishes in that section, one is pumpkin and one is aubergine, leaving me mere seconds away from proposing to anyone within earshot. The pumpkin is lovingly bathed in a rich Makhani sauce, the colour of a red brick chimney. It’s thick with paneer cheese and a depth of tomato and garam masala. The pumpkin itself roasted to a satisfying char. The aubergine has entirely given up its form to a smokey mound, topped with peanuts and a cool raita. The presentation is beautiful, this is so far removed from your local curry house.

These are served alongside breads topped with green chili, garlic, and Berkswell cheese. Presented like a more glamorous version of the mini pizzas I used to get at school, but these are anything but. You could argue that one each was too much. The fact that our plates could have gone straight back in the ‘clean’ draw would argue otherwise. Although they were a little short on the promised chili heat, the wafer-thin cheese melts away the second it hits your tongue. These should be heavy but they’re light and moreish. 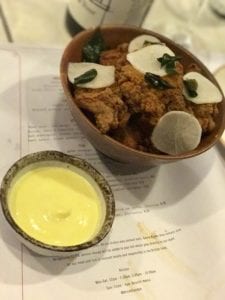 The same can be said for the wonderful Bhel Puri. A traditional dish of puffed rice that a colleague described to me as ‘Something Indian’s give to their kids to shut them up’. Well, it worked on these adults too. The crisp rice, clinging to refreshingly sweet mango and a slightly sour tamarind, with yogurt finishing the melange. It coats your mouth and, alongside a cold beer, would be all this writer needs forevermore.

Despite the considerable fish options, we decided to head for the meat. The benefit of the seating allowing us to survey our neighbours plates come and go. Telanagana beef with paneer and roti is not quite to the same standard as the other dishes. The thin strips of beef slightly shortchanging those expecting a more substantial plate. There’s no such problem with the Keralan fried chicken, however. The endless spins on KFC in London are becoming a little bit overplayed but this might have the Colonel licked. Crisp, spicy batter coating moist chicken with an almost citrus-like curry leaf mayo. I lied, give me these, the Bhel Puri and a beer and I’m yours, forevermore.

And so it all comes back to size. Did Kricket make the transition and keep its soul? They’ve managed something pretty special here. The food for two was £43.50, which is incredibly reasonable although we significantly padded that with two bottles of red. A word on the previously mentioned friendly service. The attempted upsell from the initially selected £23 wine, twice, to try to get us to a £39 bottle is too much. We held firm, but it’s the only sour note in a triumph of a meal. It’s not unreasonable to stop in prior to a show and get a few small plates and a modest bill. It’s also possible to have a blowout celebration.

Far from Kricket selling out, I’ve completely bought in. In moving from their diminutive beginnings to more high-profile surrounds, they’ve not forgotten the magic that made them so popular. In fact, I’d go as far as to say they’ll be selling out moving forward, Monday to Sunday.

Kricket is a Central London gem. With an informal approach to fantastic Indian food to share. From the moment the smell of the open kitchen kicks in, to the moment you leave, this retains its roots through authentic yet refined cooking.