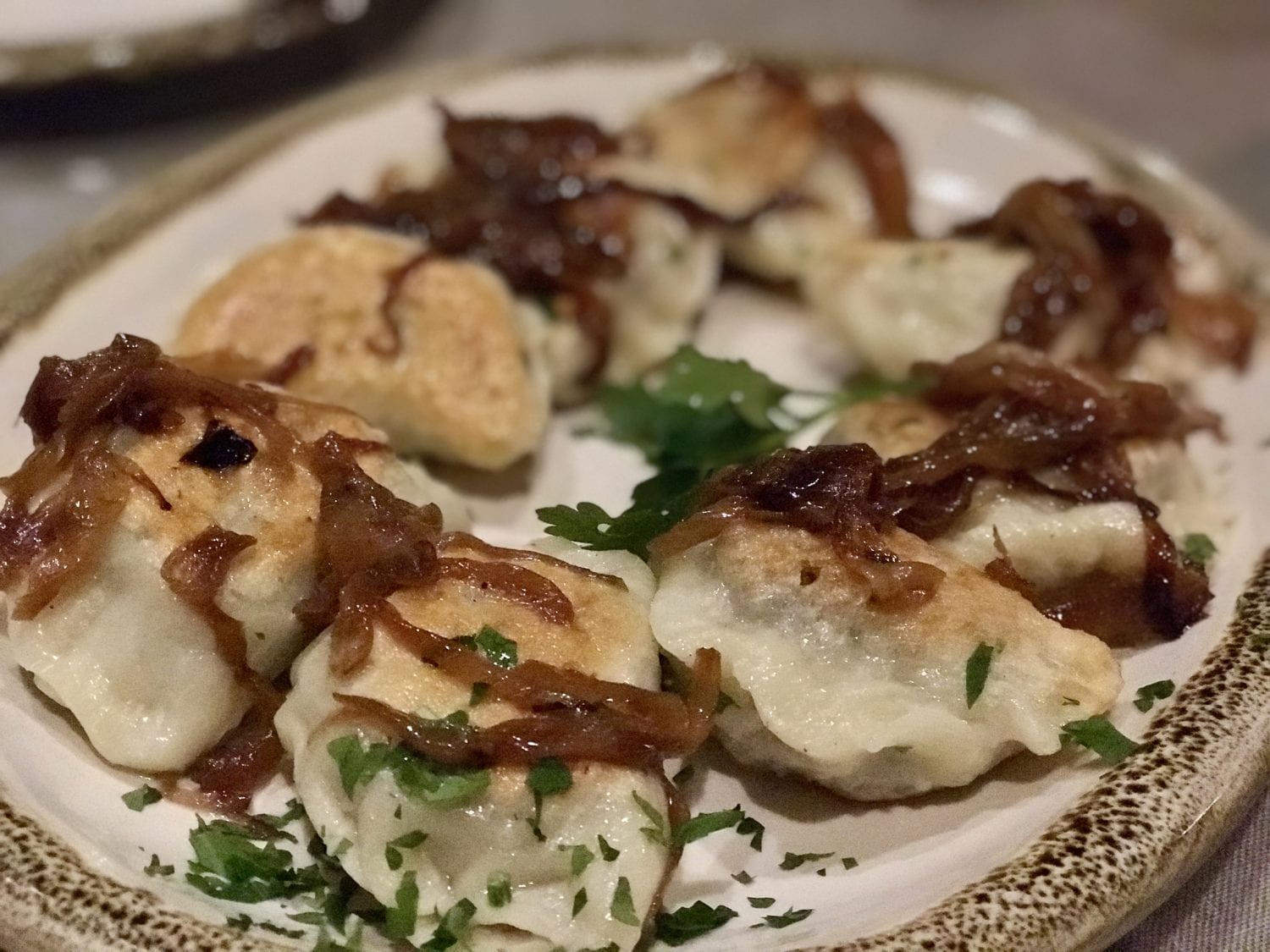 Getting Your 'Claws into Poland

Let me start by saying that, for me, pierogi are love.

I may well be two generations removed from my Polish heritage but elements have trickled through into my life. Largely via food. I vividly remember visiting my Babcia laying out feasts in front of us. Everything slightly unfamiliar but tugging on the same parts of my heart and head as my mum’s cooking. I remember chicken soup with noodles, filling and warming. Nothing seemed to escape a generous coating of dill, especially boiled and buttered new potatoes. This was food designed to keep the cold winters at bay.

I don’t believe we ever had pierogi when young but, as I’ve gotten older, they have become a constant recurrence. They’ve even become sort of a cult hit amongst friends. Small, soft parcels stuffed with cream cheese and potato or fine mince, with a small slick of bacon pieces. The rendered fat coating the beige pillows into a satisfying, shellack-like shine.

Like a Polish gyoza (or pot sticker), they’re intensely enjoyable. Over a beer catching with friends or when you’re feeling down in the dumps. As a snack or as a meal. They tear a chewy rip as your teeth plunge into them, spilling forth their contents. Immediately smiles trip over faces. You don’t need the cultural heritage to realise how many fond memories go into these joyous morsels. 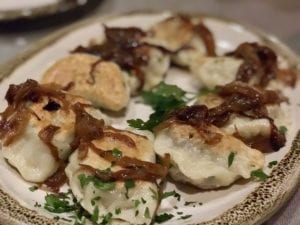 So it’s with great excitement that I approach any suggestion of ‘traditional Polish’ cooking, as with the promise of Pod Fredrą. Just tucked off the corner of the central Rynek Square in Wroclaw. The twinkling Christmas lights of the market bouncing off its windows and detracting from the usually imposing wooden doors.

Traditional Polish is indeed correct. Large, dark wooden benches and high ceilings, brass horns on the wall and photos of historic moments. It’s more like a church than a restaurant, were it not for the place settings. The menu probably hasn’t changed in as long as the stylings either, and believe me, that is the best of things.

The pierogi should come with a warning that you may not want to participate in any other course. As classic as they come but with a dense, moist mince filling bulging from its straining confines. Like a shirt straining on a portly banker in a London Gaucho. We ordered two plates as a starter. We all agree, we should have ordered four.

Lucky we didn’t, mind, as we asked about the ‘Chef’s Recommendation’ for mains. Turns out at Pod Fredrą the ‘recommendation’ is that they could provide a platter of selected items from the menu. Who are we to refuse such hospitality? Starring in our own version of 12 Angry Men; 4 Hungry Guys.

The secret here though is Bigos, the classic hunter’s stew. Taking sauerkraut and leftover cuts of meat and simmering down with stock. Reducing it down to a falling apart stew, rich with meat fat and more than a little tang from the cabbage. It’s common for it to be ordered as a beer snack, as well as a side. A hearty, warming hug to welcome you in from the cold. 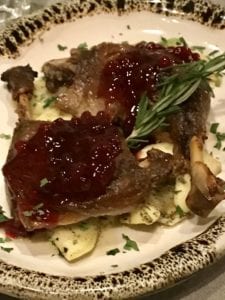 A Leg Up – Duck with Apples and Cranberries

Outside of the Bigos, the mains are all solid and hearty meat dishes. A crisp-skinned but falling apart duck is served with an apple and cranberry sauce that’s just the right side of savoury before it becomes compote. Grilled chicken and pork chop are more in the category of ‘does what it says on the tin’, however.

Finish up with a Polish vodka that will put hairs on your chest. With a little hint of cinnamon for Christmas, you can shut your eyes and feel colour return to your cheeks. Blood flow back into your toes. It turns out a lot of Polish traditions involve drinking.

It’s no coincidence how many ‘traditional’ foods are similar cross-regions and countries. Just with slight cultural twists. For pierogi, read those gyozas, or maybe even empanadas in South America. Bigos with your pint? What about beef and Guinness stew in Ireland, or Steak and Ale pie in London. Comfort and home cooking know no borders. These types of cooking have stood the test of time. One suspects Pod Fredrą may well do too.

Traditional Polish Fare with a Flourish

Pod Fredrą serves up the greatest hits of Polish cuisine. It might be too much ‘meat and two veg’ for some but the pierogi and bigos are both excellent. It’s a great place to settle in and feast over a few beers, and maybe a few vodkas. It’s definitely on the upper end of traditional Polish in Wroclaw 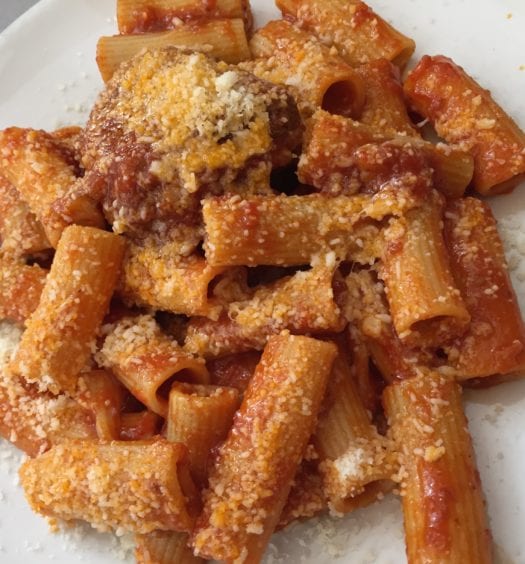 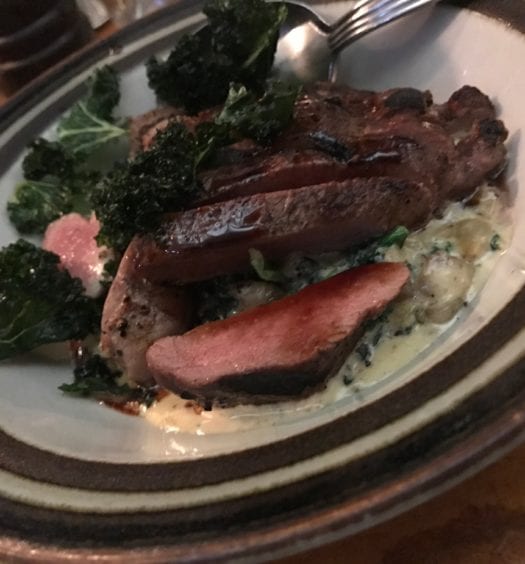