Tapeo is usually everything I would be wary of when visiting a major European city. It’s set in El Born district of Barcelona and sits facing another small, traditional tapas bar and the two are a stark contrast of new vs old.

Its neighbour is rough and ready. You jostle to get to the front of the bar to order a few cerveza and look at the small plates of tapas behind sneeze guards. A giant leg of ham sits like a trophy at one end. The walls adorned with pictures of Spanish history in black and white or sepia. A classic, stood-the-test-of-time, tapas bar. It’s jam-packed.

By contrast, Tapeo is glitz and glamour. Black, polished, modern fronting, bar seating and mood lighting. It looks too sleek to be authentic. Almost too polished to have any depth of character. But this came with the highest recommendation by a colleague and was bloody hard to get a seat at, so try we must. 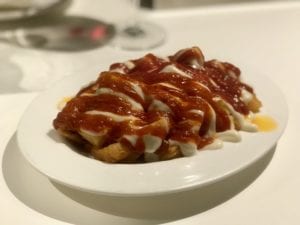 The first hint should have been the web domain. Ok, that’s pretty niche for tip–offs to foodie hotspots. But look at it (above). Go on, I’ll wait. See? ‘.cat‘. Despite the modern fronting, this is a bar fiercely proud of who they are and their region.

We get settled at the bar stools gestured to us by the lady running seemingly everything. She buzzes around, front-of-house, chief barmaid, in charge of service. Everything. Her energy is infectious, it smacks of passion and it continues throughout.

The menu is divided into sections but they reinforce the stance. There’s ‘classics’, ‘from Barcelona’, ‘traditional Catalan’, and ‘from the local country’. In the current climate, they may as well read as a giant middle finger. If you’re unaware of the side of the divide they fall on, this clears it up for you.

Iberico ham croquettas are gooey and unctuous. They ooze out when the crisp shell is penetrated by your fork. It’s unclear why they’re always so bad in England but uniformly great across Spain, cheap bar or expensive restaurant. Patatas Bravas are the best we had, with a rich coddling of spicy tomato sauce. Marinated tuna belly shows is an attempt at a more elegant touch, Spanish sushi if you will. The fish is superb and fatty, but the dressing potentially takes it into slightly too-oily territory. 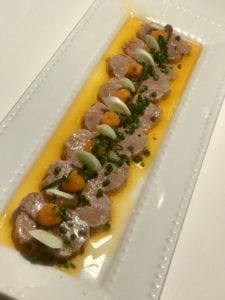 Steak with chimichurri is the only thing that’s ho-hum. The dressing well made but the beef a million miles away from the rest of the produce used. The meat overpowers the sauce yet still manages to underwhelm. Fortunately, there are no such issues with the octopus (by now, you’re not surprised, right?). It’s charred to a gum on the outside and has a satisfying chew to otherwise soft flesh and garlicky chickpea smear.

An absence of paella has been a shame for the entire trip – rejected for a table at ‘the best version in town’. But Tapeo has a different take with Fideuá, originally a Valencian dish with cut up noodles instead of rice. Cuttlefish chunks separate the noodles, a vehicle for the stock-saturated sauce and a great accompaniment for the bottle of Rioja.

What’s not here is almost as important as what’s not, however. When we enquire as to if there are any Padron peppers, I’m informed that they’re out of season. It’s a small touch but not pandering to the tourist masses, at the risk of compromising quality, is huge. 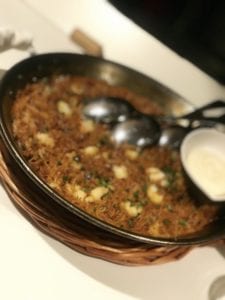 The personal touch continues when we order the sausage and wild mushroom cannelloni. In theory an Italian dish, I’m cautious. Talking to our energizer bunny of an owner, she tells me how this comes from her own childhood. Her family, after Christmas, used up the leftovers to create this cannelloni with the remains of the previous feast. These small parcels of joy and richness being the very essence of family. It reminds me of my mum making me lasagna when I was down in the dumps.

We mop up the last remnants of the plates and I remember why I love food. It’s how closely we identify ourselves with the things we’ve eaten.  Lasagne might not be an English dish, but it will always take me home. In this time of a fight for independence, it’s a reminder of what a huge part of our cultural identity it is. The three of us finish our glasses and nod in agreement that under 140 Euro for the bill is more than reasonable. The empty bottle of wine and a few gin glasses telling it’s own story as to the value.

That cannelloni made me feel a little bit like I knew what it was like to grow up in a Catalan home. To return to a safe space of family and love. It’s not for me to judge one way or the other in the debate, but I’ll settle for understanding more about their differences. As we leave and I look at the tapas bar opposite, I realise that they might not be so different after all.

Tradition Hidden Behind a Smart Veneer

Tapeo serves up a mix of traditional tapas dishes and slightly more refined uses of local techniques and produce. The former is slightly more successful than the latter, but if you’re looking for a smart place to wine and dine with a loved one while in Barcelona, Tapeo is a great spot. Or even if you’re 3 middle-aged guys!