Sure of a Big Surprise - Into the Woods (Rye, Blackberry and Sandel)
StockholmBars & Cocktails

Being two rational, well thought to through human beings, we decided that following on from our fika and coffee, in the cobbled walkways of Gamla Stan, we’d go for 4.30pm cocktails. Because that’s what adults do. In fairness, we had heard good things and didn’t know if we would end up back in that part of town. And we had walked all morning. Ok, I’m done making excuses.

Pharmarium is located in the oldest square in Stockholm called Stortorget. Cast in the shadow of the old stock exchange building and sweet little cafes. The exterior could be a Vodka Revolutions for how it stands out. When you walk in though, it’s an entirely different vibe, half speakeasy (that dreaded word), half apothecary facade. One of the big round tables is almost roulette table-esque. Apothecary is probably closest to the desired feeling. Pharmarium clearly wants to show that cocktails and drinks can be as much of an adventure as food in a Michelin destination. There’s food on offer too but the vibe is very much focused on cocktails. I would struggle to even see myself having a dinner in the atmosphere and layout. 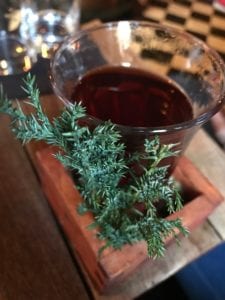 Sure of a Big Surprise – Into the Woods (Rye, Blackberry and Sandel)

The choice on the menu backs up the sense of attempted artistry. There’s definitely a lot of effort here and no signs of ‘classic cocktails’. The first round we attempted to go away from my usual fruit-free options and went for an ‘Into the Woods’ and a ‘Nighthowler’. The latter sounding like it would have ended up in a tequila-induced, adverse reaction. It was definitely not my choice.

The Into the Woods was a mix of earthy rye with sweet blackberry and hints of Sandel. It feels like it should be smokier, but it tastes sweet. Although it’s perfectly well made, I can’t manage more than a few sips. The Nighthowler that I turned my nose up was, however, a real cocktail. Served in a sphere container filled with sandalwood smoke, it’s a grown-up drink. Gin and Tequila well balanced with sweeter agave and lychee, ensuring nothing is too sacarine or sour before the smoke. 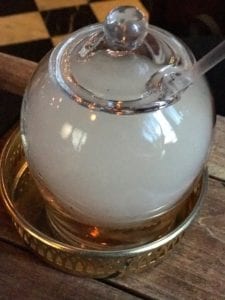 Howl at the Moon – The Nighthowler (Gin, Tequila, agave and a big plume of smokiness)

In hindsight, I wish we had just ordered more of those. Instead, a gin, tonka-infused tonic and blueberry long drink (Tonka and Tonic) arrives. Alongside a drink based around the Swedish fruit Hjortron (like a raspberry), paired with cognac and hop cordial (Birch and Beer). Both are stylishly presented, Birch and Beer even comes in a cut open beer can. But the former is sickly sweet and the latter is still more syrup than hop.

Pharmarium really does try and push to make interesting cocktails, and it doesn’t fail at making you intrigued and trying new tastes but there doesn’t seem to be enough balance to the menu. Everything borders on lip-smacking sweetness. Maybe if you have a sweeter tooth this will work, but when cocktails are around 160 SEK (£13-14) a drink, you really need to all walk away with a smile, and all of your teeth.

Well made cocktails but a menu that lacks balance

There’s some well-made cocktails at Pharmarium, there’s just a lack of balance to the menu. That would be fine if alcohol wasn’t so expensive. When it is, however, there really needs to be a range for all tastes.