Deep Down In Louisiana, Close To New Orleans

Some of my fondest memories of food involve me with my hands and mouth covered in the moment’s excesses. There’s something altogether more enjoyable about the tactile nature of getting involved with your food. Digging in and pulling at bones to tear apart meat, or bundling something into a mouthwatering parcel to cram into your mouth. Maybe it’s satisfying the inner glut, maybe it’s something more tribal. It’s just intensely satisfying.

My mum used to tell us as kids to not play with our food, but looking back, I’m pretty sure it was her who encouraged it. I have vivid memories of children’s parties and having to jump up to doughnuts on strings to nibble them down with no hands. Mouths covered in a sugar-syrup mess, as I’m sure was the kitchen floor. As we got older, it was slow cooked lamb shoulder, torn into a soft wrap with vampire-warding tzatziki.Yes, I’m certain I can blame my mum.

It’s these memories that come flooding back at another celebration this year. As two hungry playmates and I grab at a plate full of boiled crawfish. We twist, suck and pull more than 16-year-olds at a house party. Soft, sweet tail meat slipping out accompanied by a smokey, spiced seasoning clinging to its fibres. A 2lb plate is beginning to look like a war zone from Little Mermaid’s ‘Under the Sea’. I’m beginning to look more and more like a more grown-up version of the sugar-faced child. The smile is equally big.

Plaquemine Lock is a recent opening from Jacob Kennedy, he of previous Bocca di Lupo fame, I’m told. Set in a former Islington pub, the Prince of Wales, it’s right atop Regents Canal. As you walk through the beautiful townhouses near Angel station, you may even miss it as a noteworthy restaurant. The pub lends itself to an incredibly casual atmosphere to serve up Creole and Cajun food that’s even won it a Bib Gourmand in the latest Michelin Guide. 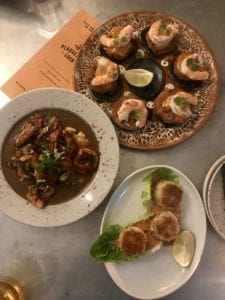 Aside from the crayfish and prawn logos emblazed on all surfaces, there’s little to distinguish it from a traditional English ‘boozer’. That is until you read through the inauspicious paper menu. Any menu that feels the need to preface with a glossary had better have a good reason. After all, we’ve chuckled at two-star places for less.

But racking my brain, I struggle to think of anywhere else in London serving similar fare. Descending from Louisiana (USA) it’s quite the departure from familiarity for most. Cajun food is descended from French-speaking Canadians deported into the region. It’s rustic and simple, based heavily on diced vegetables and hits of cayenne pepper. Taking things like crawfish and game and mixing with dark rouxs. Creole cooking, on the other hand, is more of a melting pot of the regions influences. Still French notes, but with Spanish, African, Southern US and even Italian touches. There are nods to all, in things like jambalaya (paella), gumbo (West African stews) and shrimp remoulade (French mayonnaise-based sauce).

It takes a momentary adjustment, but then you realise that everything is mouthwateringly tempting. It’s not a refined style of cooking and it fits with the surround. We order local craft beer from the loaded drink menu and start plotting how to divide and conquer the new terrain. 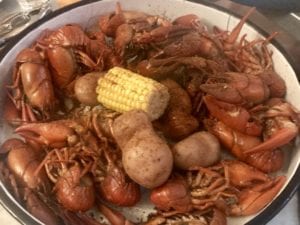 It doesn’t take long for our table space to disappear in a sea of deep red-hued bowls and plates. For what Plaquemine Lock’s dishes lack in variety of colour palate, they make up for in the scent wafting from the table.

Shrimp and Grits with bacon come with the churlish option to make it small or large. Maybe you’re willing to compromise? We were not. Our eagerness is rewarded with a thick mound of grits, the consistency of al dente rice pudding. It oozes with butter making it a rich, welcoming blanket for the shrimp sauce encompassing it. The shrimps fight and successfully hold their own. Sweet rounds, tucked between the tense grains of the grits and the earthy pepper notes of the terracotta-coloured sauce.

It’s almost demanded that we order shrimp remoulade by the friendly barman. Glossary unchecked, we took his word for it. Fortunately, there’s little to regret in heading for the unknown. Green tomatoes, dredged in cornmeal and fried crisp, are home to more shrimp. Kept in place by the mildly spiced remoulade. The unripe tomatoes hold their shape, only giving at the last minute, long after the crunch of the crust.

A Crawfish Mac ‘n’ Cheese is golden and crisp. The top looks like scorched earth in the Savannah. Underneath it’s impossible to tell pasta spirals from crawfish. Each mouthful a little surprise. On the ‘side’ are collard greens, in the remains of piggy, ham hock cooking liquor and smothered okra. They are small for the price (£4) but are more accomplished than most London variants. 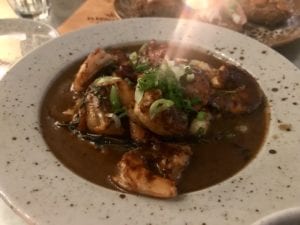 The Grit Between Your Teeth – Shrimp & Grits

Then there’s that crawfish. Simple, resplendent. Thought of as bugs in the Bayou, here they are the pride of the table. There are shrieks as bits of shell and juice fly up from our hands. Smiles as each of us drop claws down themselves. And satisfied murmurs as we chew on the hard-earned jewels of meat.

It’s fun, it’s engaging. It puts a smile on your face and goes perfectly with a pint of beer or a cocktail. Most of all, it captures the feeling of community among everyone on your table. People reaching across to grab the last crab cake. Someone telling you that you have to try the Mac ‘n’ Cheese. Forlorn, puppy dog eyes as you realise you’ve had your share of something.

If it’s not clear already, this is not fine dining with white tablecloths. They would hold no purpose here as it would be a never-ending stream of laundry from the fallout of each meal. It’s not ‘order your own main’ territory. This is friends laughing and grabbing at bits from plates and sipping down beers. It’s heart on your sleeve food and ‘let’s get messy’. 24 years older, and all I’ve learnt is to replace the sugar stained face with cajun spice.

Throwback some beers, forget about a bib and prepare to get a little messy. Plaquemine Lock is playful but with some serious cooking and minimal pretence. Adjust to the glossary and get stuck into a little bit of Southern hospitality.