Last time out at Eggslut I explored my dalliance with hangovers. Well, inevitably what precedes the morning after, is the night before. Sometimes you’re aware of your impending doom, the anticipation building all week. You eye the clock on your laptop, counting down the hours. And sometimes it blindsides you, completely unsuspecting. Before you know it, you’re staggering the streets of Dalston muttering something about Korean food and cocktails.

So my friend (more carer) and I found ourselves, on one February Friday. The pressures of a stressful week and the sweet relief of the weekend rolling in, I felt adventurous. Out the Rolodex came, a long list of trendy restaurants with ‘buzz’. Places to visit when thinking is off the cards. Shep’s, near my old neighbourhood of Haggerston, is listed with a simple entry of ‘Korean and Cocktails’. If ever there was a mission statement for the slightly inebriated, this is surely it.

Right slap bang in the middle of Kingsland Road, round the corner from The Fox and former the former Dalston icon Passing Clouds, sits Shep’s. Its inauspicious frontings give way to an equally simple decorated interior befitting of the East London setting. You could say stripped back, I prefer ironically minimal. 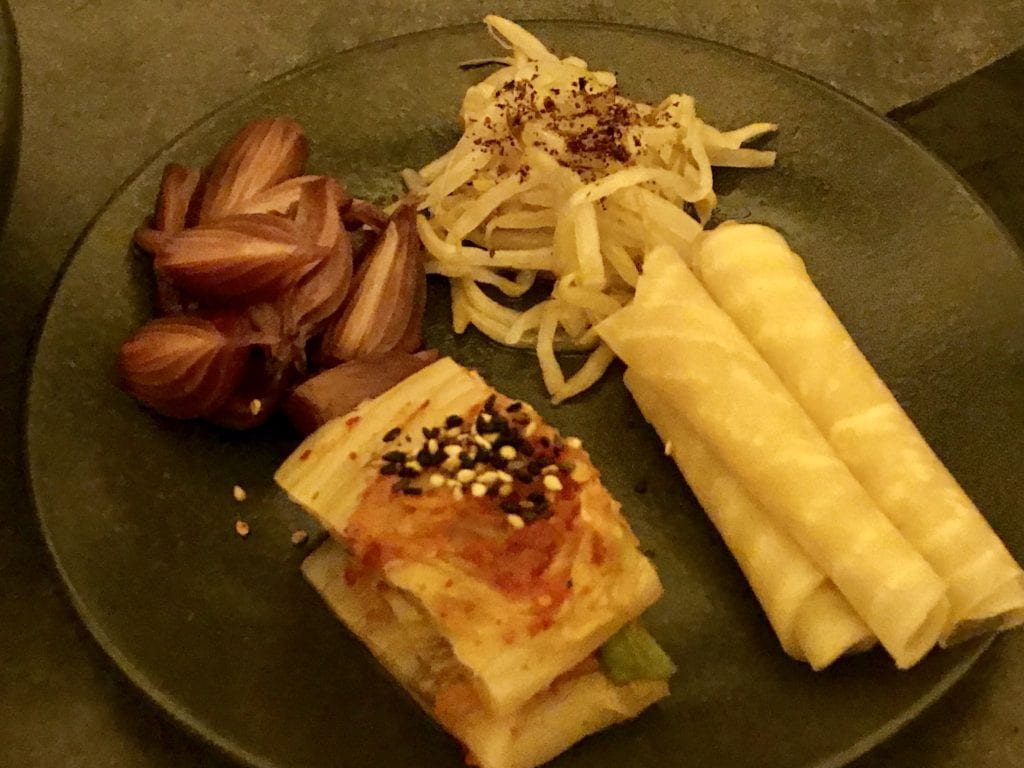 Quite the Pickle –
Seasonal Pickle Plate

We take a seat at the high bar stools, separated by an exposed bulb, because of course. They form a dull glow against the steel panel walls.  It’s like something out of an upmarket, detective film noir. I half expect someone to be smoking a cigarette in a trilby in the corner to come and interrogate me. Instead, we’re enthusiastically told that it’s Friday and the local pale ale from Hackney Brewery comes with a shot of JD. For £6. This probably ends badly. Or, in a crime scene at least.

The menu features a lot of Korean highlights. Kimchi, fried rice, dashi and the like. Yet it still ventures slightly outside of ‘tried and tested’, London-safe territory. It’s a good thing too, there’s now a lot of Korean food in London, so a diversion from the norm is a positive. One such sidestep is the option of oysters. Rare on Korean menus around this city they may be, but apparently, they’re in abundance in Seoul. Consider me taught. Maybe it’s the JD but I still feel adventurous and we go for it. 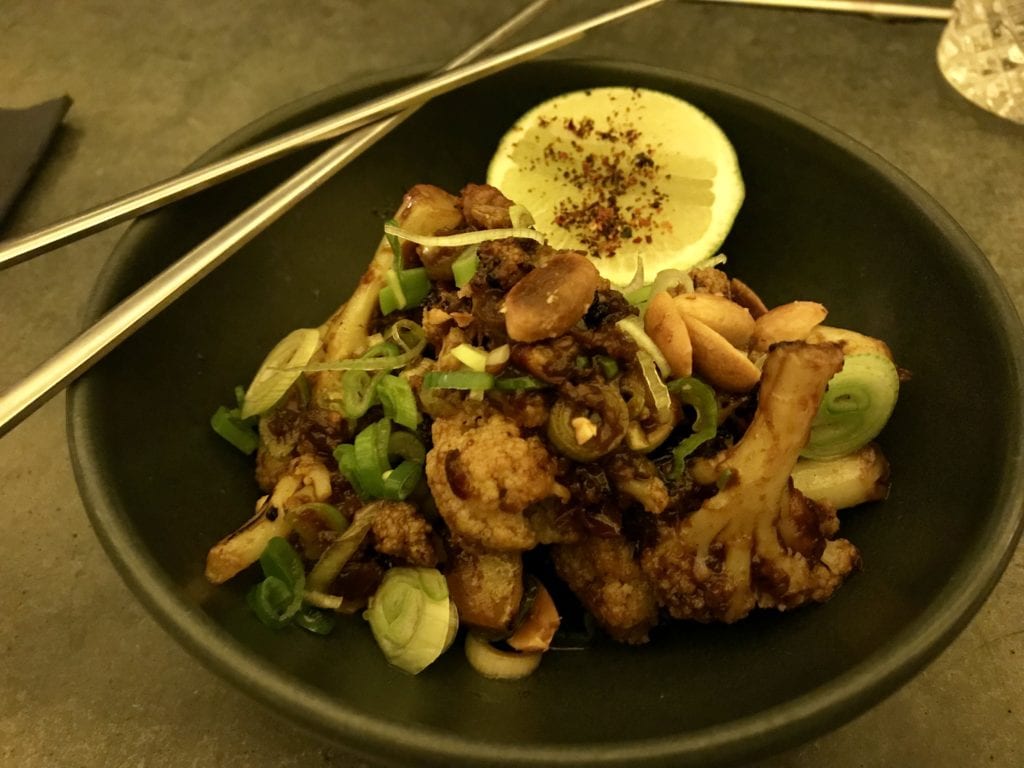 Guilty as Charred – Charred Cauliflower with Fermented Chili and Peanut

I’m no oyster fan but a chargrilled jewel comes doused with chilli and ginger butter. It’s warming and slips down with a final warming kick. If this was always the serving option, consider me all in from now on. Slightly hazier now, it shakes a few of the cobwebs out. It’s followed in rapid succession by a glorious looking bowl of kimchi fried rice, charred cauliflower and a side plate of pickles.

The JD is kicking in now. Even in low light, the bowl of rice looks both inviting and comforting with pops of colour. The giant egg yolk begging to be stabbed with chopsticks. I curse that the lowlight will never allow my meagre iPhone camera to do it justice. Pork jowl accompanies it, with thick, gnarly pieces. It’s a close, kissing cousin of pork belly. They’re rich and the charred edge sits well on top of the unctuous rice. It’s somewhere in the ballpark of Korean risotto with pancetta. 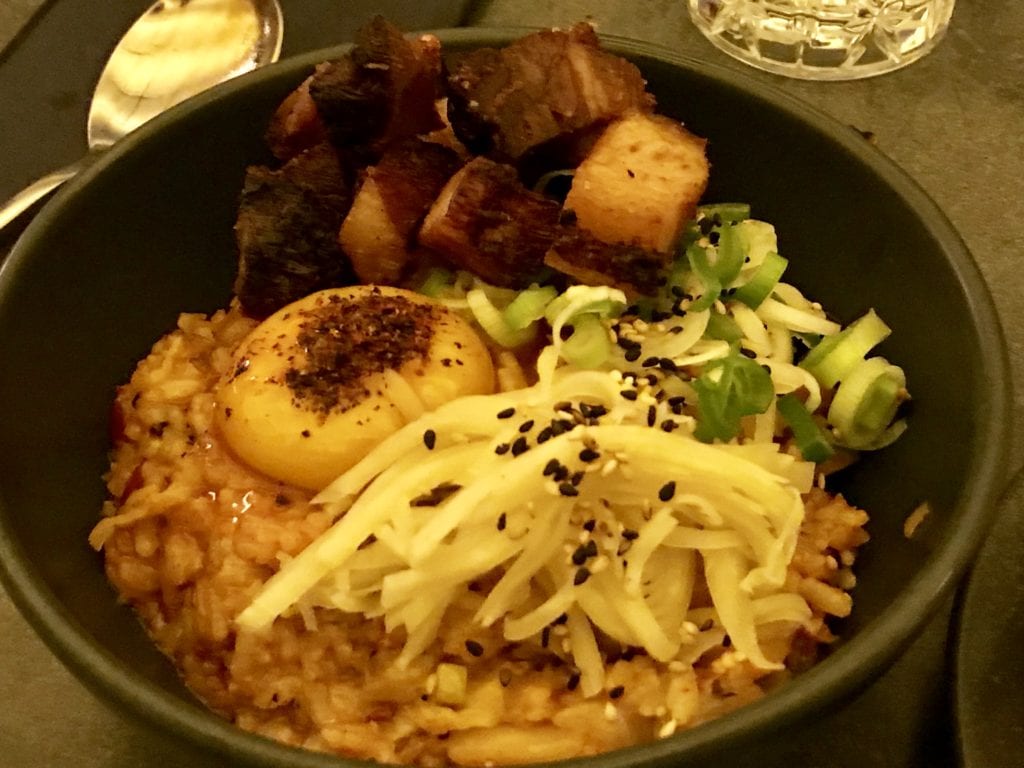 Charred cauliflower is a jumble of satisfyingly crunchy peanuts, sharp spring onions and tender, giving florets of meaty cauliflower. Had we been vegetarian we would have been incredibly happy. We’re not, and we still were. The pickles (kimchi, shallots, daikon) all added a touch of freshness to all of the rich ingredients and a little sour tongue twist.

The JD and pale ale working its way through our system, we fumble through our pockets to sort the bill. Aside from the alcohol offers, there are some bargains to be had here. The cauliflower dish is a steal at £5.50, for example. Even the Ssam plate maxes the menu options out at £14. Perfectly sized for food on a night out, and leaving plenty of money in the pocket for a stagger to Ridley Road Market Bar.

Shep’s is a refreshingly varied take on the standard Korean food in London. Whether you’re looking for some hot oysters or snacks to go with a beer or something more substantial and a cocktail on a night out, they’ve got you covered. If I could give you one piece of advice? Maybe start with the food, then have the JD.

In another world, Shep’s could be a further reflection of East London’s own desire to try hard at ‘authentic’. In practice, it delivers on its mission statement: Korean and cocktails. The kimchi fried rice is to die for and with such good value, you’ll be able to afford a few more cocktails.